Cats Claw (Uncaria tomentosa):
A South American herb with claw-like barbs which allow the plant to climb. Shown to exert a potent anti-inflammatory effect, making it particularly useful in all joint and muscle pain.

Turmeric (Curcuma longa):
Although famous for being one of the main ingredients of curry powder, Turmeric has a long history as a medicinal herb in Chinese and Indian medicine. Science has borne out its traditional use as an anti–inflammatory. The anti-inflammatory effect of Turmeric is mainly due to its major constituent, curcumin. Curcumin is a volatile oil which has been shown to exert an anti-inflammatory effect equal to cortisone and phenylbutazone, with none of the toxicity problems associated with these pharmaceutical drugs. Tumeric also is a potent digestive aid, protecting the repairing the stomach lining. This action can be useful when there has been an history of using anti-inflammatory drugs which have the potential to erode the stomach lining.

Glucosamine Sulphate, an amino sugar which is one of the main building blocks of cartilage.
Omega 3, Essential Fatty Acids (EFAs) exert a natural mild anti-inflammatory effect. They are also useful in removing toxins from the body.
Large doses of vitamin C, 500-3000mg per day, Ester C being the preferred form.
A teaspoon of apple cider vinegar per pint of drinking water.
Nutritional yeast powder, which is rich in B vitamins. 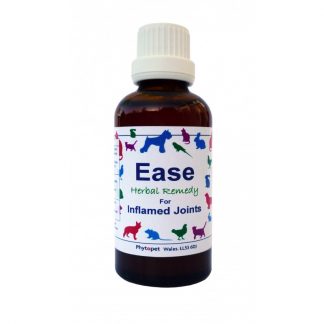